To share your memory on the wall of Emerita Farnan, sign in using one of the following options:

Print
Emerita A. Brady Farnan, 97 of Weston, Missouri, died Friday, May 22, 2020 peacefully at her home.
Emerita was born May 19, 1923, on her family’s farm near Guildford, Missouri to John Emmett and Margaret Gertrude Corcoran Brady. She married... Read More
Emerita A. Brady Farnan, 97 of Weston, Missouri, died Friday, May 22, 2020 peacefully at her home.
Emerita was born May 19, 1923, on her family’s farm near Guildford, Missouri to John Emmett and Margaret Gertrude Corcoran Brady. She married Joseph Eugene Farnan on August 12th, 1947 at the Holy Family church in Conception Junction, Missouri.
Emerita devoted her life to her family, her children, her grandchildren, and to her faith. She taught and inspired thousands of children spanning almost six decades as a Sunday school teacher at Holy Trinity Catholic Church in Weston and more than four decades as an elementary teacher at West Platte R-2 of Weston, Missouri. After retirement and the death of her husband Joe, Emerita began visiting the elderly and sick in area nursing homes to read the Bible and poetry and to lead them in prayer. She continued to do so well into her nineties. She also served as a reader at Holy Trinity and was an Extraordinary minister of the Eucharist on Sundays and remained a member of the parish Women’s Guild, ironing and cleaning church linen until just a few months ago.
All her life, Emerita was guided by an inner strength and perseverance and a powerful moral compass. She loved deeply, prayed with all her heart and taught and learned with an inexhaustible curiosity. Her children and friends all attest that her prayers were heard and that what she prayed for usually happened. She was a devoted Catholic who cared more for others than herself and prayed daily for peace and good will. She was a devoted teacher who believed ‘one book, one pen, one child and one teacher can change the world.’ And that the only way to be a great teacher was to love and respect the differences in each child. Her tireless energy, willingness to accept any challenge and not just hear but understand other’s points of view ceaselessly raised the spirit and care of everyone she touched. Her superpower was to inspire others to believe they could overcome any obstacle and achieve any goal. She made everyone feel uniquely valued.
Emerita’s mother died when she was just 5 years of age. She learned to bake for her single father and 8 siblings before she was tall enough to reach the table. Her lifelong love of baking has been passed down to her children, and grandchildren and great grandchildren. After the Depression, the loss of the family farm and World War Two, her father announced he could only send one of his children to college. Emerita volunteered and attended Maryville State College. After marriage and moving to Weston and raising six children of her own, she went back to school and completed her degree at Missouri Western State College in St. Joseph, Missouri in 1971.
She was preceded in death by her beloved husband, Joe, who died in 2004. The next day she wrote a long entry in her diary that concluded. “My dear husband definitely went to the Lord’s table. I have so many happy memories, but I miss him so much. We were still much in love.” We are sure she has joined him there now and are also thankful for so many memories.
She was also preceded in death by her parents; her granddaughter, Hannah Rue Farnan, grandson, Colby Farnan, and great grandson, Finnegan Adams, brothers: Edmund, Robert and Donald Brady and her sisters Eileen Schieber, Gertrude Schuster, Sr. Margaret Brady, CPPS, Stella Marie Farnan, Rosalie Wilmes.
Surviving are her children; Philip [Betty] Farnan, Richard [Aryn Roth] Farnan, Barbara [Mel] Lott, Patrick [Deann] Farnan, Donald [Cathy] Farnan, and David [Katherine] Farnan, twelve grandchildren: Tina Farnan, Josh Farnan, Sarah James, Emily Viebrock, Eric Lott, Kristen Adams, Erinn Lott, Catherine [Caitlin] Wood, Allison Farnan, Regyn Farnan, Leo Farnan, and Jack Farnan and 9 great grandchildren: Justin Farnan, Athena, Mylina, and Serenity Farnan, Tycik and Zayvin James, Brayden and Eleanor Lott, and Kinslee Adams. She had many nieces and nephews, other relatives and friends. She has a special place in her heart Caitlin Brady, for nieces Judy Myers, Mary Ann Coppersmith, and friends June Kisker, Shannon Egan, Suzanna Bartee, Larry Newman, Susan Wurtenberger and Sharon Groom.
In lieu of flowers, memorials may be made to the Acolyte Scholarship Fund in care of Bank of Weston.
Visitation will be held from 1-3 pm, Tuesday, May 26 at Holy Trinity Catholic Church, Weston, MO, followed by a funeral service at 3 pm. A celebration of life will be planned for a later date.

The viewing from 1 to 3 is for the public. Before the viewing, Emerita’s body will process around the school house and through downtown, if you wish to show your respects at a safe distance, please feel free to wave as we pass or sit in the school parking lot to wave. The family will not be present at the viewing. Social distancing will be practiced and the entrance and exits are separate so that all can remain safe.
Read Less

To send flowers to the family or plant a tree in memory of Emerita A. Farnan (Brady), please visit our Heartfelt Sympathies Store.

We encourage you to share your most beloved memories of Emerita here, so that the family and other loved ones can always see it. You can upload cherished photographs, or share your favorite stories, and can even comment on those shared by others.

Posted May 27, 2020 at 04:41pm
Your mother was always a gracious host growing up in Weston. It didn't seem to bother her as to how many of your friends of the family showed up at her house. She was always great to us all. I know how much the family will miss her. God Bless you all! J.W. Page
Comment Share
Share via:
K(

Posted May 26, 2020 at 09:50pm
Mrs. Farnan was my first grade teacher back in the early 80s. She was a great teacher of academics as well as life lessons. I was fortunate enough to run into her at graduation a few years ago when my class was recognized for being out 25 years. Some of us got to visit with her and take a photo, which I just saw the other day. I am one of so many who was lucky to be a student of hers. What a beautiful lady who lived a wonderful life! ❤️
Comment Share
Share via:
KW

Posted May 26, 2020 at 09:12pm
You have our deepest condolences on the loss of your Mother, Emerita, Teresa will miss their phone conversations very much
Kevin and Teresa Wilmes
Comment Share
Share via:
M

Posted May 26, 2020 at 12:25pm
I have nothing but wonderful memories of this beautiful lady. She taught me so much about teaching and life itself. I have been so very Blessed to b able to say she was a dear friend. I will forever miss her, her vitality, and her wisdom. I know you are resting comfortably with the Lord and your beloved Joe ❤️🙏🏻❤️
Comment Share
Share via:
PV 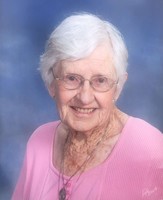