To share your memory on the wall of Morgan Beamer, sign in using one of the following options:

Ross was the ultimate dad. He loved fanny packs, grilling, fishing, NewBalance shoes, yard work, and tucking in his t-shirts. However, his greatest love was his family. He will always be remembered for being at every event with great enthusiasm. He could always be relied upon to do anything from bringing forgotten homework to school to fixing something broken around the house. He was dependable. Ross will be greatly missed.

Ross is survived by his wife, Stacy, of 31 years, his father-in-law Victor DeWayne Martin, his son Marty and wife Jessica, his son and daughter, Chase and Ashleigh, and two grandchildren, Oliver and Charlotte

A visitation for Ross is planned for Thursday, November 12th, 2020, at 10 am with a funeral to follow at 11 am. Both the visitation and funeral will be held at Faith Community Church, 4214 NW Cookingham Dr, Kansas City, MO 64164.

To send flowers to the family or plant a tree in memory of Morgan "Ross" Beamer, please visit our Heartfelt Sympathies Store.

We encourage you to share your most beloved memories of Morgan here, so that the family and other loved ones can always see it. You can upload cherished photographs, or share your favorite stories, and can even comment on those shared by others.

Posted Nov 11, 2020 at 02:22pm
Sorry for your loss. Ross "Yoda" was an intrigual part of the success of the PCHS Golf Program. He will be missed, but his teachings will live on.

Posted Nov 10, 2020 at 03:39pm
Dear Stacy and Kids - May you find comfort today with the love that surrounds you. You are in our thoughts and prayers.

Posted Nov 10, 2020 at 02:30pm
Ross was one heck of a guy, and we will miss him. Condolences to the whole Martin-Beamer family. We are thinking of you, and we are here for you.

Sean, Cheryl, Ashleigh and Alex purchased flowers and planted a memorial tree for the family of Morgan Beamer. Send Flowers 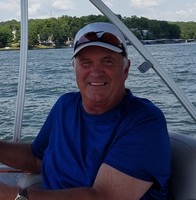