To share your memory on the wall of Cecil Barton, sign in using one of the following options:

Provide comfort for the family of Cecil Barton with a meaningful gesture of sympathy.

There are no events scheduled. You can still show your support by sending flowers directly to the family, or planting a memorial tree in memory of Cecil Lee Barton.
Plant a Tree

We encourage you to share your most beloved memories of Cecil here, so that the family and other loved ones can always see it. You can upload cherished photographs, or share your favorite stories, and can even comment on those shared by others.

Posted May 07, 2020 at 10:01pm
I knew Cecil most of my life. Worked with him for many years at TWA and AA. I have nothing but respect for the man. Whenever I think of him, I'm sure a smile will form RIP Cecil.
Comment Share
Share via:
M

Posted May 07, 2020 at 12:47pm
I will always have a special love for my Uncle. He was an amazing man . The last of my fathers siblings. Much love and prayers.
Comment Share
Share via:
BL

Posted May 07, 2020 at 09:30am
I’m so sorry for your family loss. Cecil was such a great man and I will always remember his smile and his wildness to help people. I remember in our younger years how he always seemed to be laughing. He will be dearly missed.
Comment Share
Share via:
EM

Posted May 06, 2020 at 11:08pm
Cora are prayers are with you and your family during this time. I am so thankful that I called Cecil a few weeks ago and we had a great talk. I will member playing basketball against Cecil in High School. Later at NWMOSU we were noted for being part of a select group that played the card game Hearts in the Bearcat Student Den. You had to be part of the group to sit at our table. Also we were knowing for someone making a bad play and the card would go flying. Cecil and I laughed about that a few weeks ago when we were talking. We had a lot of fun times at NWMOSU, however on Friday he was in the car headed back home to see you and family. 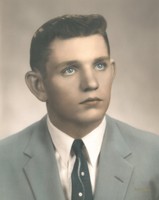